(the below is a review spiked by a prominent architecture monthly, apparently because they'd already published a lot of criticism of the author in question, and didn't want to appear 'obsessed'. Nobody else wanted to publish it, and so here it goes) 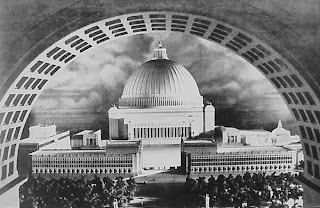 In his introduction to this new edition of Leon Krier’s 1985 monograph Albert Speer – Architecture, Robert Stern points out, quite rightly, that Krier has never worked for, nor flirted with any currently existing totalitarian regimes; nor is he grandiose as a designer or urban planner. Rather, he bravely tries to tackle the quandary of whether ‘a war criminal can be a great artist’. Skim through the book and you’ll note that Krier’s drawings and graphics are, as always, clever and elegant, and you’ll note an epigraph in big letters: ‘classical architecture and the passion of building are this book’s only subject, its sole justification’. Albert Speer – Architecture consists of a presentation of Speer’s oeuvre, a long essay, ‘An Architecture of Desire’, a historical essay on 20th century classicism by Lars Olaf Larsson, and an introduction by Speer himself. In this new edition ‘An Architecture of Desire’ has been updated, but the both versions are included.

What stays the same is an attempt to explore, as an alternative to modernism, a certain line in National Socialist thinking, which Krier believes he can disassociate from Nazi racism. The SS leader Otto Ohlendorf and the Nazi thinker Gottfried Feder become precursors of Charles Windsor – propagators of a return to small, coherent towns, civic virtues, organic agriculture, restorers of what they called ‘man’s feeling for his homeland’. By contrast, writes Krier, in modern Germany city-dwellers are condemned to live and work in modernist buildings that ‘do not seem to belong to their country’. What has this to do with Speer and his super-urban neoclassical metropolis, Germania, and how is this car-centric moloch to be related to these arts and crafts dreams? Krier himself doesn’t seem to know. His response is to see Germania as a ‘mirror for modernism and socialism’, where they could find their own preoccupations in slightly distorted form. It's a tenuous link - German industry and German industrialists got very rich out of the Third Reich, as Krier himself acknowledges. He asks us incessantly 'what if Hilberseimer or Mies had redesigned Berlin? Wouldn’t that have been worse?' He has no answer to the obvious counter-question: 'so why didn’t they? If they were more Nazi, why didn't the actual Nazis think so?'. 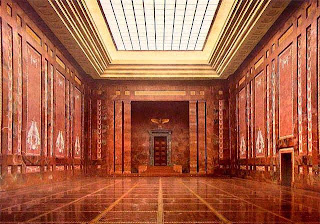 The speculation continues in a bizarre fantasy where he imagines the implementation of the Morgenthau Plan, a programme entertained for a time by the Allies that entailed the dismantlement of German industry and ruralisation of its economy. In this scenario, the prophets of an agrarian and/or classical Germany like Ohlendorf, Feder and Speer would have been as honoured and respected as Ferdinand Porsche or Werner Von Braun were in the real postwar world. That Von Braun was responsible for mass death is clear, although perhaps not as much as an Einsatzgruppe leader like Ohlendorf, and that is presumably the moral we are to take from this. It doesn’t occur to Krier that Nazism needed rockets and garden cities and standardization and concentration camps, all of which were part of a syncretic and inherently unstable ideology where autobahns and V2s would fulfil the dreams of the Teutonic Knights. In architecture, this meant what Kenneth Frampton in Modern Architecture - A Critical History described as ‘stylistic schizophrenia’ – at Herbert Rimpl’s Heinkel complex in Oranienberg, the offices were neoclassical, the housing arts and crafts and the factory functionalist. Similar dichotomies operated in the work of American architects like Albert Kahn, although the connection to 'modernism and socialism' is harder to spot. Regardless, Krier has nothing to say about any of this.

Particularly telling are the differences between the two versions of ‘An Architecture of Desire’ (so-called because of the apparently maternal nature of the Germania dome, among other things). Krier in 1985: ‘many people are more disturbed by the grandeur of Speer’s designs than by images of Auschwitz’. In 2012, this is toned down to ‘images of Speer’s designs’ and ‘those of concentration camps’, which is not the same thing, although absurd in a lesser way. The notorious statement that ‘Los Angeles and Auschwitz-Birkenau are children of the same parents’ has been removed entirely in the later version. References to modernism as the product of fossil fuels have been newly inserted, though this evidently concerned neither Speer or the younger Krier. And while 28 years ago, Krier was angry that the Soviets had used the marble from the Reichskanzlerei to build their war memorials, he now appears to believe that it’s apt revenge. Or does he? The new version is ‘edited by Irene Perez-Perro’, which implies that the bowdlerization of the book’s most offensive and apologist statements was contracted out.

And the architecture, apparently the sole subject, the sole justification? Speer appears to have been a mediocre but efficient neoclassicist, and as Lars Olaf Larsson’s cogent essay makes clear, his neoclassicism was not unique in the ‘30s. To ask ‘why Speer? Why not, say, Zholtovsky, Bonatz, Asplund or Lutyens?’ is missing the point. Krier’s project at its root is to both de-Nazify classicism and Nazify modernism, via a contorted, dishonest and historically valueless argument. Krier, in a claim vastly more ‘totalitarian’ than any made by his stock modernist villains, writes at one point that ‘by its nature, civic classical architecture does not exert terror’. Speer’s own introduction to the volume, meanwhile, states otherwise. He and Hitler, he writes, would talk about how a visitor from the provinces would visit Germania’s Great Hall, ‘that gigantic area of 220 metres high and 250 metres diameter, and feel literally crushed by what he saw’. The war criminal was more honest than his apologist.
Posted by owen hatherley at 05:48