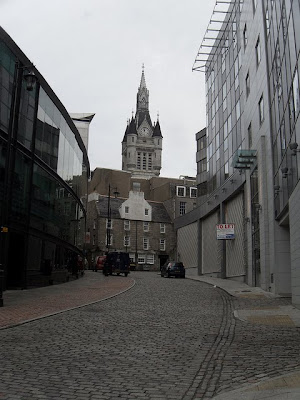 It often escapes attention, especially south of the border, but the UK is a petrol state. Although, unlike that riot-torn paragon of inequality, violence and social collapse Norway, the British government had the good sense to leave North Sea Oil in private hands, much money has been generated by the oil deposits off the north-east coast of Scotland, and it should have left some interesting effect on Aberdeen. This former fishing and shipbuilding town should, in theory, be a pulsating hub of the enterprise economy, it should glitter with gorgeous architecture, vaulting forms and general pugnacity. Full of petrodollars and a large population of 'wealth creators', it ought to be a thumping vindication of British free market capitalism. 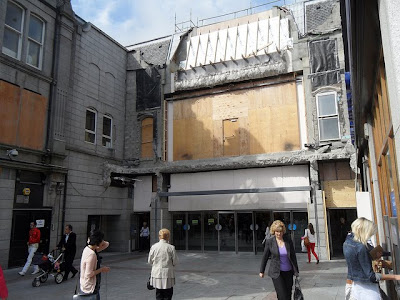 Strained sarcasm aside, it isn't quite that. Aberdeen, when it was a pejoratively thin-lipped and Presbyterian town that made its money from fish and boats, had the kind of proper architectural and urbanist ambition so common to Scotland and so foreign to England. Strict building laws, a focused and clear town plan, decent upstanding architecture, all worked together to create a unified, coherent urban identity. It also had the luck of ready supplies of granite. It is odd to find an entire city made of this stuff, to put it mildly; under the slate grey skies, it is an environment so regionally specific that it could easily get lachrymose; literally almost everything in sight is grey. You can just imagine the likes of Will Alsop, Christophe Egret or AHMM having coronaries in the face of it. 'But where is the vibrancy?' 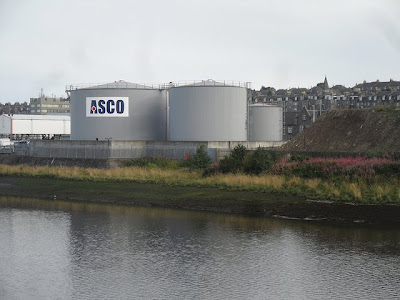 In fact, Aberdeen is bustling most of the day, with the colour scheme obviously not having an immediately depressing effect, and in that at least the traces of the oil money can be seen. The central paradox of Aberdeen, though, and it can be expanded across the UK as a whole, is as follows. When it was a relatively poor town, Aberdeen spent enormous amounts of its time and money on architecture and planning; Union Street nearly bankrupted it. Architecture from the 1930s to 1970s shows a decent, if sometimes dour municipal standard being kept up. Yet in the thirty-five years since Aberdeen has been The Oil Capital Of Europe, the city has not seen a single worthwhile building in the city centre. Not one. Over a quarter-century of parsimony and mediocrity has been wealth's bequest to the city. In fact, as you soon find if you cross the Dee into the tenements of Torry, not even wealth has been wealth's bequest to the city. Maybe for the first few years, until the gold rush calmed down, there just wasn't time – but the recent proposals, and recent buildings, are perhaps worst of all. That this isn't even surprising is indictment enough. How on earth did we settle for this? How did Aberdeen settle for it? 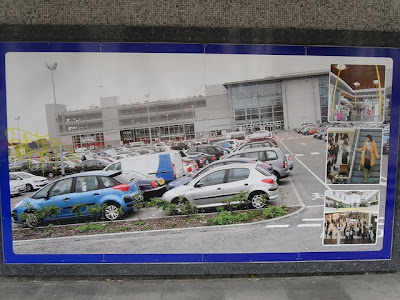 Often, the reason for the poverty of architecture in the UK is easily ascribed to industrial decline. The story is the same whether the site is in Wapping, Govan or Holbeck; shell-shocked municipalities agreeing to anything that might possibly reinvigorate their moribund economies and generate jobs and investment; fancy architecture can wait, but for god's sake don't put off Persimmon, Tesco or Travelodge. What makes Aberdeen an almost shocking experience is that here it doesn't apply. There's a port, and it's working all day, with ships and dockers in constant movement. The harbour area reflects that, from the new hotels to the signs in Norwegian in the waterside theme pubs, to the monumentally obnoxious traffic, with endless lines of lorries and the longest pedestrian waiting times imaginable. Unlike the superficially comparable nuclear port of Barrow it doesn't feel like a strange securitised graft onto a dying town, but very much part of it, organically connected to the life of the city. Yet just next to it is a new Ibis Hotel that is every bit as dismal as every other Ibis Hotel in the UK – more so perhaps because of the way it clumsily spreads itself out across a sloping cobbled street, which terminates in a miserable Vue cinema. Aberdeen's planning department surely knows that Ibis needs them more than vice versa. It can't have come from lack of confidence. Yet the exact same racket is at work here as everywhere else. 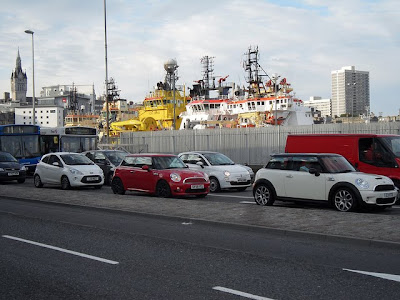 Aberdeen's 'civic heart' is going to undergo changes, as the REGENERATING ABERDEEN posters everywhere make clear. Regenerating it from what, you might ask? From what recent period of decline in this highly economically successful city? That noted, something strange happens to dereliction in Aberdeen. The pristine granite doesn't really age, but of course things grow on disused buildings here as much as they do everywhere else, so there is the interesting spectacle of shrubbery growing out of otherwise sparkling grey stone buildings, seen most vividly on the Edwardian baroque Mackintosh department store, which also boasts some nice Jules Verne external walkways. The general standard of 18th and 19th century buildings in Aberdeen is impressive, partly for rectitude, partly just for consistency, and that tradition of slightly staid but dignified architecture was obviously continued in the early 20th century, as in the ghostly neo-Gothic of Alexander Marshall Mackenzie's Marishal College and his conversely amusingly stolid neoclassical St Mark's Church; and the American classical RBS building on Union Street showed metropolitan flair. The 1960s municipal buildings are similarly flattered by their material. The only pre-petrol disappointment is Aberdeen Market, its ungentrified space clearly very important to the city's liveliness, but architecturally sadly introverted. 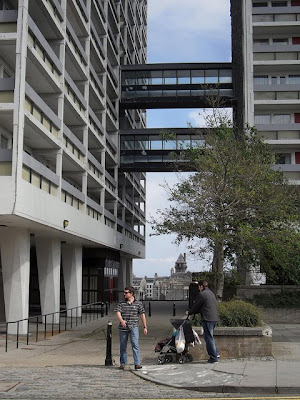 Where it gets really interesting, however, is in the sweep of the Rosemount Viaduct, whose dramatic engineering leads up to tall, thin tenements and eventually to A.B Gardner's Rosemount Gardens, a delightful mini-Karl-Marx-Hof in granite. Copying practically to the letter albeit on a miniature scale the precedent of Red Vienna, this is a curving courtyard building enclosing secluded gardens, decorated on the street façade with optimistic Eric Gill-like sculptures. Very interestingly, and unusually for a non-new town in Scotland, post-war modernism was of exactly the same quality, although on a far greater scale. In fact, they emphasise their size fearlessly; the especially dramatic hilltop Gallowgate estate features maisonettes and then towers stepping upwards from a vigorously modelled car park. What is unusual is the level of upkeep. Whatever scorn should rightly be poured upon Aberdeen's recent architectural commissioning, they can't be faulted for maintenance of their council housing estates; one of the city' many puzzles. Yet these towers were clearly of a high quality from the start. Under the control of municipal architect George McKeith rather than Wates or Wimpey, there was no system-building, no cheap solutions, but in-situ concrete, sharp Corbusian designs, and granite infill that glows beautifully in the (admittedly rare) sun. And somehow, the city has neither privatised them or let them rot. It's a wonderful surprise. They were still building tower blocks to this standard as late as 1985. Why here? It doesn't seem to exactly fit with the city's other priorities. But at least the money went somewhere decent, for once. 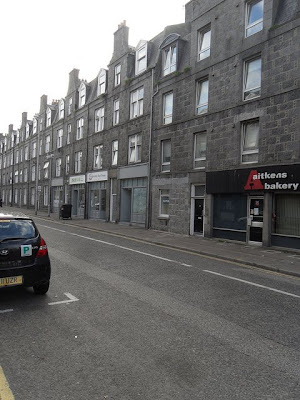 But conversely, walk around the Victorian tenements of Torry, and you could be in a granite Gorbals, depressed and sad as the ships go in and out of the dock just adjacent. The walk there goes through some of the places where the oil money went, most of which is mercifully confined to the suburbs. A drab 70s office block with a new, even cheaper new glass bit added, is the offices for Sodexho, ODS Petrodata, Atkins – a strange mix of engineers and our usual outsourcing vultures. Further on, the wipe-clean business park nonentity of the Bridge View office block, and then Union Square, the city's new megamall. In the centre of town, just opposite Marishal College, there's a city council poster of Union Square's surface car park, its grim exurban-imposed-on-inner-urban expanse in front of Marks & Spencers, as if they were proud of it. Next to it is a clumsily massed Jury's Inn, but the mall itself commits its own acts of civic thuggery – namely incorporating and swallowing up part of Aberdeen Railway Station next door, which has instead a reduced, unimpressive back-side frontage to the street. It's so much less important. 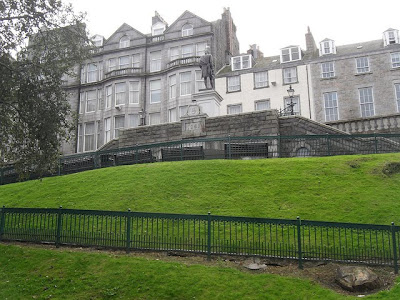 The real disaster hasn't happened yet. Union Terrace Gardens is a fabulous public space carved out of infrastructural accident, a bowl curving down from a viaduct along a railway track, a magical little place of mature trees, strange steps and courting goths. It's completely unique in its topography, a park with real terrain, not a mere civic concession. It is scheduled, despite heavy opposition but with the assistance of local oil millionaires, to be levelled, to create an underground shopping mall, or rather a 'cross between an Italian Piazza and a mini-Central Park'. Is there anything more provincial than that statement? We could be a great Scottish city, but instead we'll settle for a crap version of somewhere else. Like so much else in Aberdeen, it is baffling.
Posted by owen hatherley at 04:26